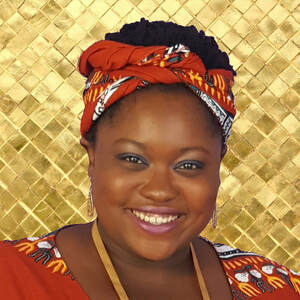 PennyMaria Jackson is a dedicated arts professional, enthusiast and advocate. With over 10 years of experience in the New York arts scene, she is recognized as a leader by Association of Performing Arts Professionals (APAP), New York Foundation for the Arts (NYFA), and Caribbean Cultural Center African Diaspora Institute (CCCADI), and has been a guest speaker at Juilliard and NYU. Born and raised in Miami, Florida, she earned an M.A. degree in Arts Journalism from Syracuse University.

​​Utilizing the power of the arts as a driving force, PennyMaria is dedicated to bridging the gap between cultures for decades to come.
PennyMaria is currently the Director of Marketing at the world-famous Apollo Theater where she has led successful campaigns for performances since 2017. During her tenure there, she has worked diligently to move the iconic Apollo institution forward, PennyMaria has been instrumental in launching the theater’s Amateur Night at the Apollo Live Stream series. She has also elevated audience engagement as she curated the theater’s first 3D experience and commissioned a permeant augmented reality activation for patrons.

Previously, PennyMaria developed millennial audiences at Alvin Ailey American Dance Theater with the Wallace Foundation and led a significant community engagement initiative at Harlem Stage. She has more than 10 years of experience in marketing and communications, community engagement, and public relations.

PennyMaria has been an invaluable member of the Harlem arts community since 2009. She served as a public member of Community Board 9's Arts & Culture Committee for several years and is a founding member of the recently established Harlem Arts & Culture Initiative (HACI). In her spare time, she reviews theater productions for Maxamoo podcast and To See or Not to See.